One in five Canadians is living with lung disease. And many of these individuals have told the Canadian Lung Association that stigma is one of the biggest issues it needs to tackle.

With that in mind, Terry Dean, President and CEO of the Lung Association, commissioned a survey of 1500 Canadians to explore and shed light on the myths, misconceptions and stigma that exist with respect to lung disease.

“If a lung disease takes someone’s breath away, he or she should be given the same treatment—both socially and medically—as anyone else during with any kind of disease,” wrote Dean in the resulting “Stigma Report.”

The survey’s findings were revealing. They showed additional hardships for those struggling to breath, with one in 15 respondents saying they believe that all lung diseases are self-inflicted and one in seven suggesting that self-inflicted diseases deserve less funding. Additional data from the study indicated
the following:

55% of respondents with lung cancer and 39 per cent with chronic obstructive pulmonary disease (COPD) said they had experienced social isolation because of the stigma attached to their disease.

45% of those with lung cancer reported delayinggoing to the doctor because of self-blame, leading to delayed diagnoses and future complications.

42% of people with lung cancer said that they feel less deserving of help than those with other types of cancer.

29% of respondents said they feel uncomfortable when they see someone with an oxygen tank.

68% said they believe those who smoke and develop COPD deserve the same sympathy as those who never smoked and develop the disease.

7% believe that all lung diseases are self-inflicted. In fact, lung disease can affect anyone. Some have genetic predisposition, while other cases it is behavioural or environmental factors that cause a lung disease.

Stigma has significant mental health impacts and causes delays in diagnoses of lung disease. Many Canadians told us that they know someone who lives with asthma, lung disease, lung cancer and/or COPD yet a lot people still feel uncomfortable. In addition;

35% of respondents said they feel it is wrong when they see someone without a visible disability parking in an accessible parking spot with the correct pass. Yet, many Canadians with chronic lung diseases have mobility issues accompanying their disease and require an accessible parking pass.

More than 1 in 7 (15%) believe that self-inflicted disease deserve less funding. This was especially true among ages 18-44.

Nearly 1 in 10 (8%) of people with lung disease have reported they’ve experienced stigmatization. 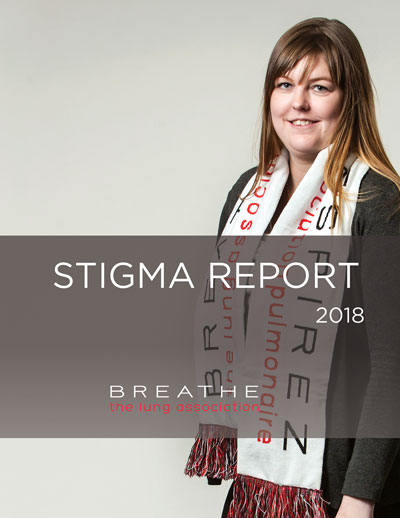 The authors made recommendations for increased public awareness, and Dean said that he hopes the report serves as a “door opener” for decreased stigma and increased conversations.

In the meantime, wise advice for all of us: See the person, not the disease. Offer support. Listen with out judging. Look at the present not the past, and do not make statements such as “You should have quit smoking earlier.” Do not assume people with COPD and asthma cannot do certain things, and learn about their triggers.

For a copy of the lung disease Stigma Report, visit lung.ca.