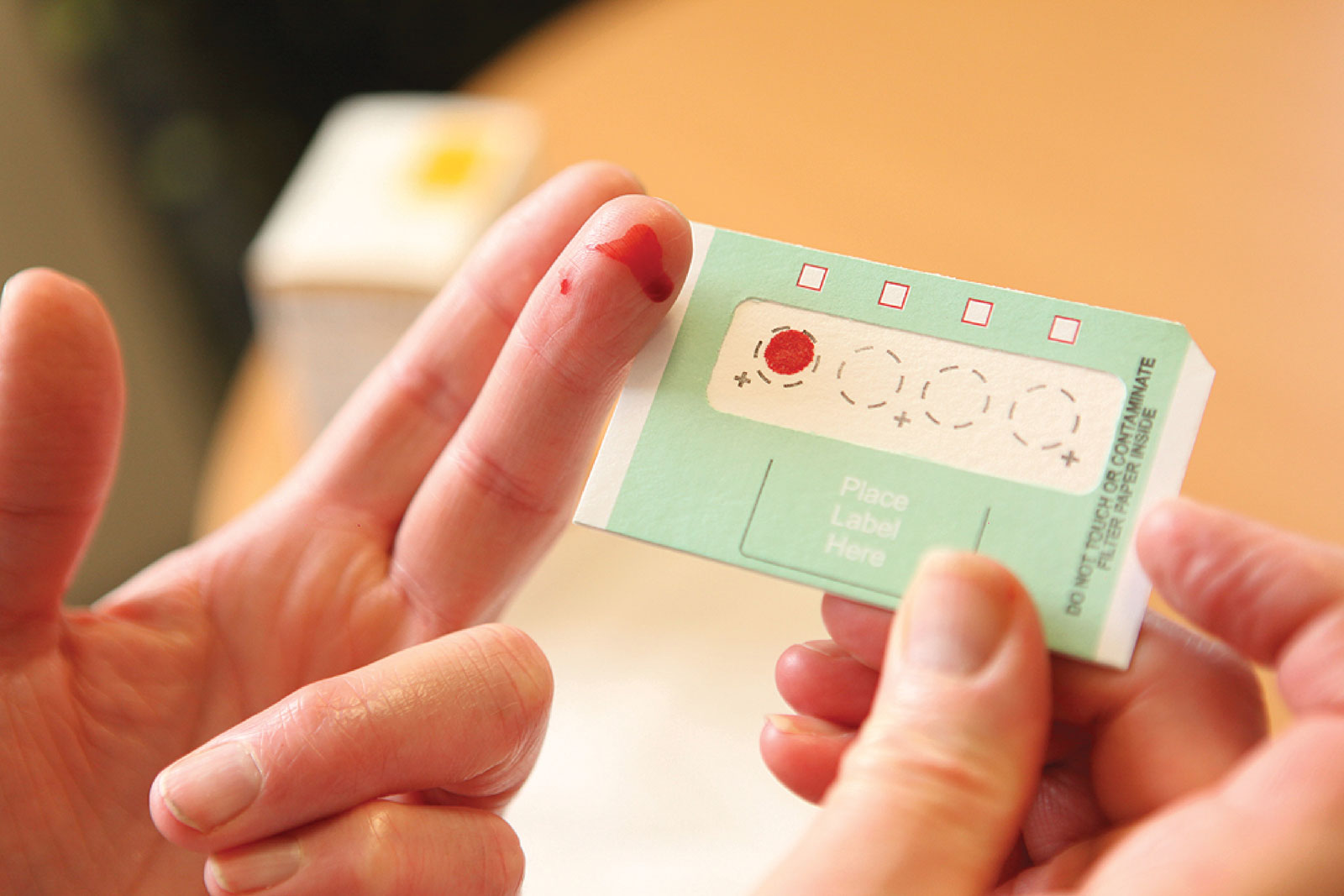 A finger prick is a new way to test for HIV in Indigenous communities.

More than 60,000 Canadians are living with HIV or AIDS today. The Government of Canada’s bloodborne infections surveillance report found that 2,561 HIV diagnoses were reported in 2018, an increase of 8.2 per cent compared with 2017. Indigenous people made up more than 19.3 per cent of those new cases.

“There’s still a lot of misinformation about HIV,” says Trevor Stratton of the Canadian Aboriginal AIDS Network (CAAN). “Some think that people who are on effective treatment and maintain an undetectable viral load can still spread HIV sexually. That is just not true. Undetectable equals untransmittable.”

Stratton continues: “It’s vital that everyone has an understanding and awareness of HIV, AIDS, and sexually transmitted and bloodborne infections, because that awareness reduces stigma and discrimination, and that is the most critical barrier to first getting tested and then finding support.”

In Canada, infection rates are almost three times higher in First Nations, Métis and Inuit peoples than in the rest of the population. This is significant, given that Indigenous peoples represent only 4.9 per cent of the total Canadian population.

For Canada to meet its part in global targets to eradicate HIV, 90 per cent of those with the virus must be diagnosed by 2020; however, one in seven currently do not know their HIV status. Only 86 per cent of Canadians living with HIV have been diagnosed. Of those, 81 per cent are on treatment, of who 91 per cent are virally suppressed.

A critical factor in meeting global targets is testing. However, there is still a stigma attached to HIV and AIDS, along with other stereotypes and access issues, that hinder testing. Even so, Canada’s ambitious targets are now a realistic possibility because of a new test that is showing promising potential to remove many of those barriers.

The new HIV test takes just a few minutes and five drops of blood on a specialized card that can be used for multiple tests. The technique is called “dried blood spot testing.” It is as simple as testing blood sugar levels for diabetes and can help reduce the stigma surrounding diseases such as HIV and hepatitis, and thus encourage more people to get tested.

Dried blood spot testing also breaks down other barriers to testing, as people feel more comfortable getting this test compared with conventional methods. Normalizing the test is a factor in encouraging more individuals to check their HIV status. For example, at some point-of-care locations, entire families have come in to be tested together, largely because of the similarity of dried blood spot testing to glucose prick testing.

The test can be administered by any health care worker, instead of needing to be carried out by a nurse or doctor. This expands the reach to remote and rural communities, and makes it easier for people who want to be tested but worry about being seen at a clinic.

Another unexpected outcome is that Indigenous communities in particular have been showing a preference for not getting the results right away. The two-week lag time between the test and receiving the results allows health workers to help prepare individuals for the possibility of a positive finding. Receiving same-day test results onsite has also been seen as a barrier to testing because of confidentiality concerns. The dried blood spot method is being piloted in First Nations communities as a way to increase the number of people getting tested.

Several challenges still exist, however, including the question of how to follow-up on test results in remote communities and hard-to-reach populations. For example, a positive dried blood spot result requires confirmation on a conventional blood test.

CAAN says it is important to raise awareness about this preventable disease and for all Indigenous peoples to have the knowledge to make a difference in their own communities and take control of the health. Each year, CAAN hosts events across Canada during Aboriginal AIDS Awareness Week to encourage community readiness and culturally safe approaches to holistic HIV testing, care and treatment. Many of the events even provide free blood testing for HIV and hepatitis C. In addition, CAAN has also launched Métis and First Nations educational tool kits for HIV and AIDS, sexually transmitted and bloodborne infections, hepatitis C and harm reduction.

Stratton says: “Our events are about sharing our stories and providing education. We’re providing a comfortable environment for important conversations that is surrounded in our culture, whether that’s a drum circle, throat singers, traditional dance or even moose tacos.”

Dried blood spot testing involves an element of reconciliation. It offers Indigenous peoples control over their health care and allows them to get tested on their own terms.

Shelley Mantei works with Indigenous organizations within Canada to increase education on HIV and harm-reduction programs.