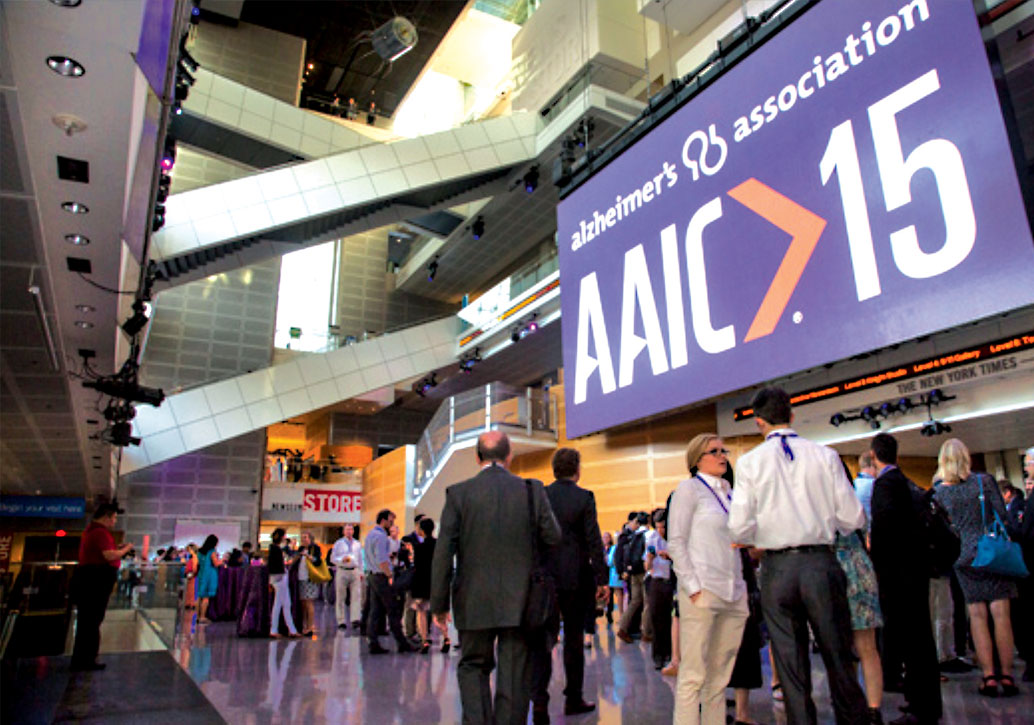 More than 5,000 experts from 70 countries assembled at the Walter E. Washington Convention Center in Washington, DC, for the 2015 Alzheimer’s Association International Conference.

More than 5,000 experts from 70 countries assembled at the Walter E. Washington Convention Center in Washington, DC, for the 2015 Alzheimer’s Association International Conference (AAIC); this annual event is the largest gathering of dementia researchers in the world. From July 18-23, 2015, attendees congregated in 10 plenary sessions, 32 symposiums, 440 featured/oral presentations and 1,200 poster presentations.

OPENING SESSION
Should there be a shift in the balance away from research support for ‘early’ detection and cure to invest more in prevention and care for Alzheimer’s disease and other dementias?
Mimi Lowi Young and Larry Chambers, Alzheimer Society of Canada representatives, chaired this session.

Debaters in favour of shifting the balance to care were Anders Wimo and Eric Larsen. Anders is a professor of geriatric family medicine at the Karolinska Institutet, Sweden, and an economist who works on behalf of Alzheimer’s Disease International to produce the estimates of the prevalence and monetary costs in developed and developing countries. Eric is vice president of research at Group Health in Seattle, Oregon, as well as a practising medical internist and researcher.

On the side advocating more research for a cure were Nick Fox and Sylvie Belleville. Nick is a clinical neurologist at the National Hospital for Neurology and Neurosurgery (Queen Square) in London, England. Sylvie is professor in neuropsychology, head of the research centre of the Montreal Geriatric Institute, and co-lead of CIMA-Q.

Even though it was early Sunday morning, about 300 members attended and many participated in the audience engagement portion
of the session. At the end of the session, the audience indicated that the “cure” side “won.”

Technology and dementia
There are various technology options to help keep people with dementia safe; the sessions revealed many products and strategies targeted to the different needs of people with dementia and their caregivers. Some of these options focused on detecting sleep issues, individual risk for getting lost and assisting with cognitive testing.

The Davis Technology Acceptance Model was the basis of a questionnaire administered to German (n=100) and American (N=34) caregivers of persons with dementia (Birgit Kramer, Network Aging Research, Heidelberg). Both samples preferred the two emerging technologies: a GPS tracking system and a home health monitoring system. Both groups reported that perceived usefulness of each technology was the most important predictor of acceptance.

Although Alzheimer’s disease and FTD are very different clinically, there seems to be a molecule that connects them (progranulin). A decrease in progranulin leads to deficits in social interactions and also to a loss of retina ganglion neurons. This loss appears to occur before FTD symptoms are noticeable, so this loss may be a very early indicator. An increase in progranulin prevents neuronal loss in mice with advanced Alzheimer’s disease and also improves their spatial memory. The question posed was, “Will an increase in progranulin protect against behavioural impairments among humans?” Much more work is needed in this promising area of research.

Timely diagnosis and treatment of dementia
A session on early intervention in the dementia course highlighted issues regarding false positives as a result of early screening. A presenter from the USA discussed a program much like Alzheimer Society First Link program. The Alzheimer Society of Ontario’s Kathy Hickman presented on the Society’s work in self-management for people with early-stage dementia.

Learning music and languages, as well as being physically active as a child, seem to have an association with a lower rate of mild cognitive impairment and Alzheimer’s disease. Late-life social activities have been associated with a lower rate of cognitive decline. Lower rates of mild cognitive impairment and Alzheimer’s disease are also associated with having:
• intimate relationships, positive social interactions, feelings of being engaged and not lonely
• space to move about (a less physically restricted life space)
• emotional connections as a child, free from neglect
• fewer depressive symptoms
• lower rates of chronic distress (different from stress—i.e., anxiety, vulnerability to stress, etc.)
• regular exposure to new stimuli
• purpose, meaning in life, goal directedness
• self-acceptance, environmental mastery, personal goals and growth, self-discipline, high conscientiousness

Thus, education and exposure to different languages and arts continue to be emphasized. Emotional connections in positive relationships can help cognitive health, as can spending time in meaningful, goal-directed activities where one gets out and explores new things, and engaging in regular cognitive, social and physical activities.

Vascular disease and dementia prevention
In a plenary session focused on microinfarcts, Julie Schneider at the Rush University brain bank research program reported new findings that vascular disease is implicated with up to 75 per cent of all dementias. The message was clear: To prevent dementia, it is key to rein in the rates of vascular dementia through avoiding or stopping smoking, controlling blood pressure, engaging in physical activity and having good nutrition.

SECOND SESSION
Ontario health administrative data on dementia showing that the incidence of dementia is levelling off. Many commentators attribute this to the link of dementia with higher levels of education, awareness, and in some cases better control of vascular disease risk factors.
Colleen Maxwell (University of Waterloo and Ontario’s Institute for Clinical Evaluative Sciences) presented

Dental care of persons with dementia
Good dental care is important throughout a person’s life, and a diagnosis of dementia (along with behavioural symptoms) should not lead to less emphasis on this key area of health care.

Hospital emergency department preparedness to care for persons with dementia
Doctors Belinda Parke and Kathleen Hunter, supported by the
Alzheimer Society Research Program, presented on their “Older Adult Hospital Readiness” research on how to improve the experience of an emergency department visit for both people with dementia and their families. The user-friendly tools that are emerging from this research will be available in the fall via the Alzheimer Society of Canada’s website.

Behavioural interventions for psychosocial care
Laura Gitlin of Johns Hopkins University reported on a systematic review of trials assessing the impact of behavioural interventions used to care for people with dementia. The review is to be published by Springer. Brodryzlova and colleagues from Laval University also reported (in a poster) on a systematic review of the impact of psychological and social interventions on care duration among informal caregivers of persons with dementia. In both of these reports, there was a call for more carefully conducted trials to increase our confidence in the results.

Evaluating new drugs in clinical trials
Considerable press coverage came out of the conference reporting on Eli Lilly’s follow-up study of two of its earlier trials. The drug, solanezumab, had missed its overall goals in those studies, but

Lilly claimed improvements in some symptoms among patients in the earlier stages of Alzheimer’s disease. The company continued testing the medicine on these patients with mild disease, and switched the patients who had taken placebo onto the drug as well. Known as a delayed-start analysis, the study compared patients who had started 1.5 years later with those who had taken the drug all along. This preliminary study suggested some overall effect that will have to be tested in future trials.

No new drugs and no new clinical trials were reported that slowed the progression of dementia. Numerous presenters at the conference argued for trials of multiple drugs and trials that include persons with dementia who also have multiple other chronic conditions (e.g., high blood pressure, congestive heart failure, diabetes, cancer).

Quality of online dementia prevention information
Julie Robillard of the University of British Columbia reported that the quality of websites with information about the prevention of Alzheimer’s disease is variable, with excellent resources coexisting with sources of misinformation in the online environment. These findings have significant implications for the growing computer-literate older adult population and their health care providers. ?

Larry W. Chambers is the scientific advisor to the Alzheimer Society of Canada and a scientist with the Bruyère Research Institute. His research, education, consultation and administrative responsibilities focus on epidemiology and program evaluation issues related to healthy aging, community health and local-level health policy development.